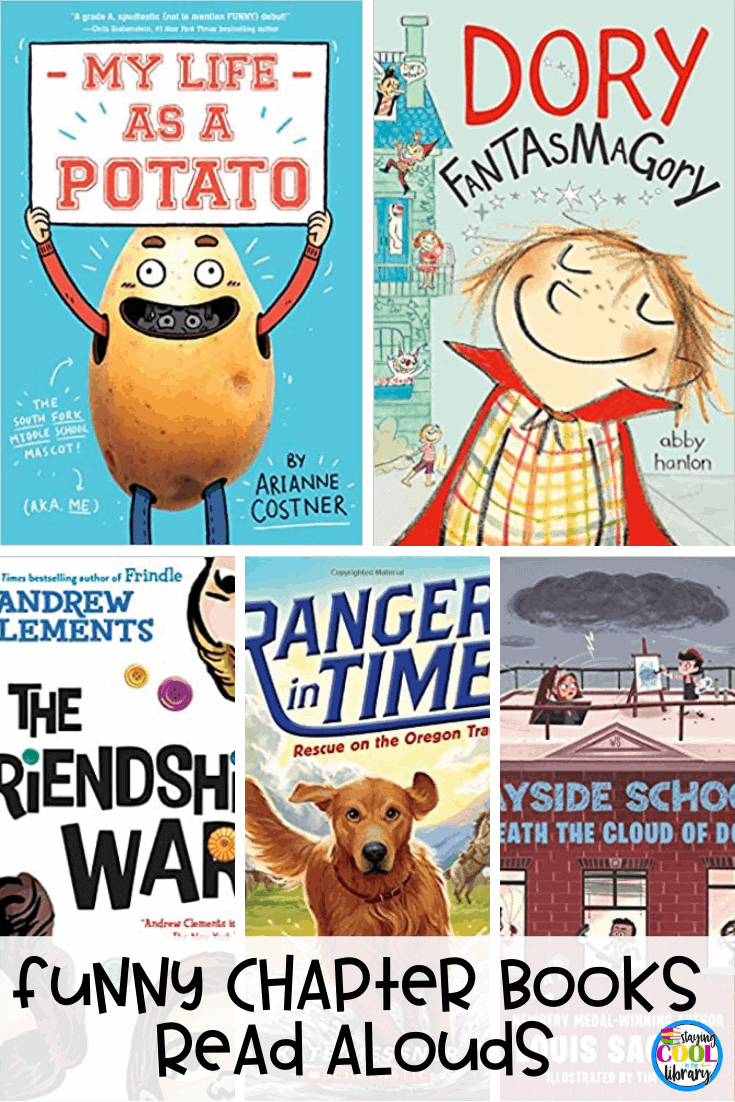 Are you looking for a read aloud that will have your students laughing out loud? During this time of self-quarantine and distance learning it is more important than ever to find ways to lighten your students spirits and make their days a little brighter. And I think funny chapter books are likely to engage your students more, especially boys and reluctant readers.

This is a collection of 15 of my favorite funny chapter books to read with your third, fourth and fifth grade students. Some of the books would be appropriate for younger grades as well, especially as a read aloud. Most of the books are newer (although I did have to include a few classics). I also tried to choose shorter books so you could read them quicker. And when everything returns to “normal” and we head back to school, you can still share these books with your students.

THE FRIENDSHIP WAR BY ANDREW CLEMENTS

Grace and Ellie have been best friends since second grade. Ellie’s always right in the center of everything–and Grace is usually happy to be Ellie’s sidekick. But what happens when everything changes?

MY LIFE AS A POTATO BY ARIANNE COSTNER

Ben Hardy believes he’s cursed by potatoes. And now he’s moved to Idaho, where the school’s mascot is Steve the Spud! Yeah, this cannot be good. After accidentally causing the mascot to sprain an ankle, Ben is sentenced to Spud duty for the final basketball games of the year. But if the other kids know he’s the Spud, his plans for popularity are likely to be a big dud! Ben doesn’t want to let the team down, so he lies to his friends to keep it a secret. No one will know it’s him under the potato suit . . . right?

MY WEIRD SCHOOL: MISS DAISY IS CRAZY BY DAN GUTMAN

In the first My Weird School book ever, second-grade teacher Miss Daisy is in over her head. She doesn’t even know how to add or subtract! But the kids have other things on their minds. Principal Klutz has promised that if they read a million pages in books, they can turn the school into a video-game arcade for one whole night!

RESCUE ON THE OREGON TRAIN: RANGER IN TIME BY KATE MESSNER

Meet Ranger! He’s a time-traveling golden retriever who has a nose for trouble . . . and always saves the day! Ranger has been trained as a search-and-rescue dog, but can’t officially pass the test because he’s always getting distracted by squirrels during exercises. One day, he finds a mysterious first aid kit in the garden and is transported to the year 1850, where he meets a young boy named Sam Abbott. Sam’s family is migrating west on the Oregon Trail, and soon after Ranger arrives he helps the boy save his little sister. Ranger thinks his job is done, but the Oregon Trail can be dangerous, and the Abbotts need Ranger’s help more than they realize!

Suzannah’s always wanted a pet of her own, but she lives in an apartment where there are absolutely no pets allowed. What she CAN do is volunteer at a local pet shelter. There, although she’s the youngest, Suzannah quickly finds herself making friends with the kids and bonding with the animals. She makes toys and treats for the animals. She feeds the cats and plays with the puppies! Then a girl just her age brings a guinea pig named Jelly Bean to the shelter. Suzannah promises that she’ll find the little creature the perfect home. But what if no one wants an abandoned guinea pig?

MERCY WATSON TO THE RESCUE BY KATE DICAMILLO

To Mr. and Mrs. Watson, Mercy is not just a pig – she’s a porcine wonder. And to the portly and good-natured Mercy, the Watsons are an excellent source of buttered toast, not to mention that buttery-toasty feeling she gets when she snuggles into bed with them. This is not, however, so good for the Watsons’ bed. BOOM! CRACK! As the bed and its occupants slowly sink through the floor, Mercy escapes in a flash – “to alert the fire department,” her owners assure themselves. But could Mercy possibly have another emergency in mind – like a sudden craving for their neighbors’ sugar cookies?

As the youngest in her family, Dory really wants attention, and more than anything she wants her brother and sister to play with her. But she’s too much of a baby for them, so she’s left to her own devices—including her wild imagination and untiring energy. Her siblings may roll their eyes at her childish games, but Dory has lots of things to do: outsmarting the monsters all over the house, escaping from prison (aka time-out), and exacting revenge on her sister’s favorite doll. And when they really need her, daring Dory will prove her bravery, and finally get exactly what she has been looking for.

THE STORY OF DIVA AND FLEA BY MO WILLEMS

Mr. Monkey bakes a cake. He can’t wait to win a ribbon! But first he has to carry it to the contest. What could possibly go wrong?

KATT VS. DOGG BY JAMES PATTERSON

Oscar is a happy dogg—a rambunctious kid who loves being a Dogg Scout. Thanks to his family, he knows that snobby katts are good for nothing but chasing up trees. Molly is a clever katt who just knows she’s destined for fame and fortune as an actress. She comes from a family of well-bred katts who despise drooly, disgusting doggs!

Just as Henry Huggins is complaining that nothing exciting ever happens, a friendly dog sits down beside him and looks pleadingly at his ice-cream cone. From that moment on, the two are inseparable. But when Ribsy’s original owner appears, trying to reclaim his dog, Henry’s faced with the possibility of losing his new best friend. Has Klickitat Street seen the last of rambunctious Ribsy?

WAYSIDE SCHOOL BENEATH THE CLOUD OF DOOM BY LOUIS SACHAR

Welcome back to Wayside School!

Your favorite students and teachers are all here. That includes Sharie, who loves her striped-and-spotted umbrella more than anything; Kathy, who has a bad case of oppositosis; Jason, who has to read the longest book in the world; and the rest of Mrs. Jewls’s class on the thirtieth floor, who are busily collecting toenail clippings. Everyone is scrambling to prepare for the all-important Ultimate Test, but meanwhile, there is a mysterious Cloud of Doom looming above them…

THE TROUBLE WITH CHICKENS: A J.J. TULLY MYSTERY BY DOREEN CRONIN

J.J. Tully is a former search-and-rescue dog who is trying to enjoy his retirement after years of performing daring missions saving lives. So he’s not terribly impressed when two chicks named Dirt and Sugar (who look like popcorn on legs) and their chicken mom show up demanding his help to find their missing siblings. Driven by the promise of a cheeseburger, J.J. begins to track down clues. Is Vince the Funnel hiding something? Are there dark forces at work—or is J.J. not smelling the evidence that’s right in front of him?

Clementine is NOT having a good week.
On Monday she’s sent to the principal’s office for cutting off Margaret’s hair. On Tuesday, Margaret’s mother is mad at her. On Wednesday, she’s sent to the principal, again. On Thursday, Margaret stops speaking to her. Then Friday starts with yucky eggs and only gets worse. And by Saturday, even her mother is mad at her.
Okay, fine. Clementine is having a DISASTROUS week. But maybe can she find a way to make it better.

FORTUNATELY, THE MILK BY NEIL GAIMAN

“I bought the milk,” said my father. “I walked out of the corner shop, and heard a noise like this: t h u m m t h u m m. I looked up and saw a huge silver disc hovering in the air above Marshall Road.”

“Hullo,” I said to myself. “That’s not something you see every day. And then something odd happened.” Find out just how odd things get in this hilarious story of time travel and breakfast cereal, expertly told by Newbery Medalist and bestselling author Neil Gaiman and illustrated by Skottie Young.