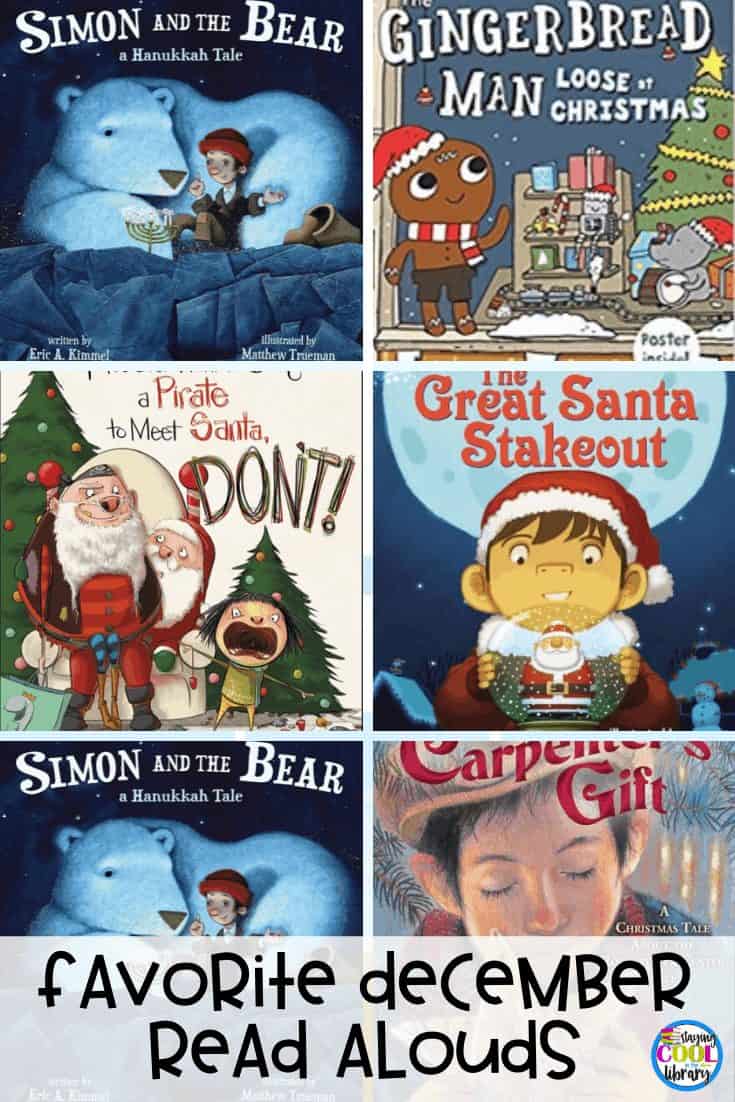 During the month of December many of my lessons focus on winter holidays around the world. These include books about Hanukkah, Kwanzaa and Diwali as well as Christmas. Below are 30 of my favorite December read alouds.

After destroying all of the gifts and decorations at home, Bad Kitty escapes from the car on Christmas Eve and finds a new friend, who helps her learn the true meaning of Christmas.

A Piñata in a Pine Tree: A Latino Twelve Days of Christmas by Pat Mora

Text in English with some Spanish words. Presents an adaptation of the folk song “The Twelve Days of Christmas” in which friends exchange gifts such as pinatas and a little girl receives a present from a secret friend whose identity is eventually revealed.

A World of Cookies for Santa takes readers across the globe to see all the treats that await Santa on Christmas Eve. Head to the Philippines, where children leave out puto seko cookies and ginger tea for Santa; jet to Russia for a honey-spice cookie; then set out for Malawi for a sweet potato cookie! When you’ve returned home, the journey’s still not over–M. E. Furman provides recipes for children to bake some of Santa’s cookies for themselves.

As Farmer Brown prepares the house for Christmas, Duck tries to play Santa–but he gets stuck in the chimney, along with all the other animals who try to help.

The Gingerbread Man and his classmates spread holiday cheer by delivering gifts and thank yous to the people of their town.

Freddy Melcher is obsessed with Santa Claus: he has posters, clothes, underwear, action figures, everything but a photograph of the real Santa–and though it will take planning, trip wires, and staying awake late, this year he is determined to get the ultimate selfie.

Bubba Brayna makes the best latkes in the village, and on the first night of Hanukkah, the scent of her cooking wakes a hungry, adorable bear from his hibernation. He lumbers into town to investigate, and Bubba Brayna–who does not see or hear very well–mistakes him for her rabbi. She welcomes the bear inside to play the dreidel game, light the menorah, and enjoy a scrumptious meal.

How to Catch an Elf by Adam Wallace

A crafty elf shares all the ways children have tried and failed to catch him.

How to Catch Santa by Jean Reagan

After waiting for days and days and days, it’s finally Christmas Eve. And that’s when you can try to catch Santa. . . .

If You Ever Want to Bring a Pirate to Meet Santa, Don’t! by Elise Parsley

When Magnolia’s family prepares to meet Santa at the local mall, she befriends a mischievous pirate and tries to get him taken off Santa’s naughty list.

If You Take a Mouse to the Movies by Laura Numeroff

Taking a mouse to the movies can lead to letting him do other things, such as making a snowman, listening to Christmas carols, and decorating the Christmas tree.

Kevin’s family is celebrating the seven days of Kwanzaa! Kevin helps his mom decorate the Kwanzaa table. They light candles with Grandma and Grandpa and learn a special word each day. They talk about working together and solving problems. On the sixth day, everyone eats and dances at a big feast!

Rescued from an animal shelter on the first night of Hanukkah, Latke has trouble learning the house rules. Despite a series of mishaps, he is one Lucky Dog!

Heading through the forest to her Bubbe Basha’s house to make latkes (potato pancakes) on the first night of Hanukkah, Little Red Ruthie encounters a hungry wolf. Includes a recipe for latkes.

When a boy finally gets exactly what he wants from Santa, he learns that owning a real penguin may not have been a good idea after all.

Olive, the Other Reindeer by Vivian Walsh

Olive is merrily preparing for Christmas when suddenly she realizes “Olive… the other Reindeer… I thought I was a dog. Hmmm, I must be a Reindeer!” So she quickly hops aboard the polar express and heads to the North Pole.

Prince of Fire : the Story of Diwali by Jatinder Nath Verma

Retells the Hindu tale of a heroic prince and his bride who are separated by the demon prince Ravana until the Monkey Army of Hanuman, god of the wind, helps them. Includes facts about Divaali, the festival celebrating Rama and Sita’s return to their kingdom.

When the rotund fellow with a sweet tooth overdoes it on the snacks, he gets stuck inside a chimney. The reindeer on the roof try pulling him out, to no avail. A dog, a cat, and some kittens try pushing from below, with no luck. It takes a tiny, ingenious mouse to come up with the way to POP! Santa out so that Christmas can go on. Good show—ho, ho, ho!

Simon and the Bear : a Hanukkah Tale by Eric Kimmel

Stranded on an iceberg on his way to America, Simon remembers his mother’s parting words and lights the first candle on his menorah while praying for a miracle, which soon arrives in the form of a friendly polar bear.

Snowmen at Christmas by Caralyn Buehner

On Christmas Eve, snowmen hold a party in the center of town and celebrate with food, music and dancing, and presents.

During the Depression, three young sisters get one baby doll for Christmas and must find a way to share.

The Carpenter’s Gift: A Christmas Tale about the Rockefeller Center Tree by David Rubel

In Depression-era New York City, construction workers at the Rockefeller Center site help a family in need–a gift that is repaid years later in the donation of an enormous Christmas tree.

In verse reminiscent of “‘Twas the Night Before Christmas,” tells of the year the reindeer went on strike, forcing Santa to audition a series of other animals to take over their job.

The Story of Hanukkah by David Adler

An illustrated retelling of the story of the Maccabees and the miracle of the oil that forms the basis of the Hanukkah celebration. Includes instructions for the traditional dreidel game and a recipe for potato latkes.

Together for Kwanzaa by Juwanda G. Ford

While celebrating Kwanzaa and its many traditions with her parents, Kayla hopes that her big brother Khari will get home from college before the holiday is over.

Too Many Tamales by Gary Soto

Maria tries on her mother’s wedding ring while helping make tamales for a Christmas family get-together, but when the ring turns up missing, Maria and her cousins eat up all the tamales in a frantic effort to find the ring.

Tree of Cranes by Allen Say

A Japanese boy learns of Christmas when his mother decorates a pine tree with paper cranes.

Turkey needs Santa’s help so he won’t be eaten for Christmas dinner. A favorite December read aloud to transition from November to December!

Where Did They Hide My Presents?: Silly Dilly Christmas Songs by Alan Katz

Well-known Christmas songs, including “O Christmas Tree” and “Deck the Halls,” are presented with new words and titles, such as “Toy Catalogs” and “At the Mall.”

Looking for some Christmas lessons to use with your students this month? Click on the image to look through all of my holiday resources. You can find Christmas Around the World reading comprehension printables, digital and print escapes, book companion packs, task cards and more. 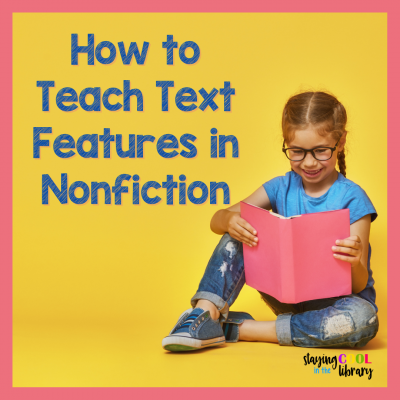 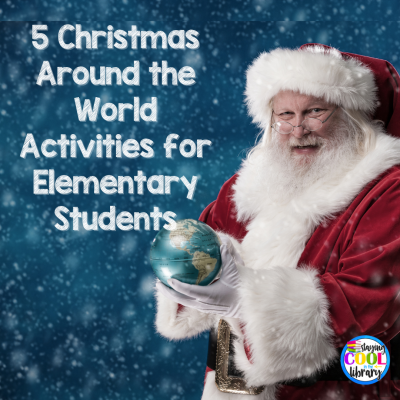 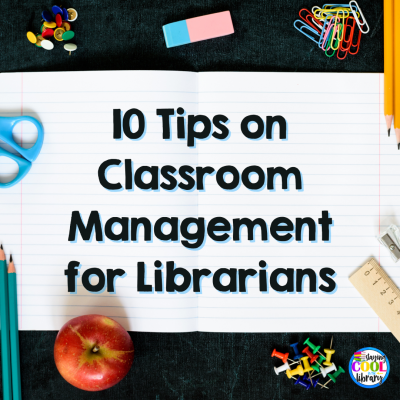