The 5 Best Fiction and Nonfiction Book Pairings for Older Students 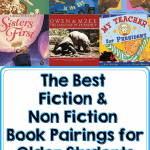 Here are some topic ideas for older students:

Here are the 5 best fiction and nonfiction book pairings for older students:

Mrs. Mallard was sure that the pond in the Boston Public Gardens would be a perfect place for her and her eight ducklings to live.  The problem was how to get them there through the busy streets of Boston.  But with a little help from the Boston police, Mrs. Mallard and Jack, Kack, Lack, Nack, Ouack, Pack, and Quack arrive safely at their new home.

This nonfiction story describes how ducks swim, dive, feed, communicate, build nests, and raise their young as well as offers information about how conservation groups are trying to protect many ducks and their habitats.

Game Changers: The Story of Venus and Serena Williams

A young girl’s wish is granted when a new sister arrives. While the baby can’t do much, over time the big and little siblings become inseparable, playing and dancing, imagining and laughing. By each other’s sides, they are smarter, kinder, and braver than they ever thought they could be. And they are forever sisters first.

The Next President: The Unexpected Beginnings and Unwritten Future of America’s Presidents

An inspiring and informative book for kids about the past and future of America’s presidents.

Who will be the NEXT president? Could it be you? When George Washington became the first president of the United States, there were nine future presidents already alive in America, doing things like practicing law or studying medicine.

When JFK became the thirty-fifth president, there were 10 future presidents already alive in America, doing things like hosting TV shows and learning the saxophone.

And right now—today—there are at least 10 future presidents alive in America. They could be playing basketball, like Barack Obama, or helping in the garden, like Dwight D. Eisenhower. They could be solving math problems or reading books. They could be making art—or already making change.

My Teacher for President

Just in time for election season, a nomination teachers and students alike will endorse. Oliver has been learning about the president’s job, and his teacher would be the perfect candidate. She loves white houses, she’s used to being followed everywhere, she attends lots of meetings, she finds jobs for people, and she believes in peace.

George and Martha Round and Round

George and Martha are lovable hippos with a very strong friendship.

Owen & Mzee: The Language of Friendship

In this exciting follow-up to OWEN & MZEE, the New York Times bestselling story about an orphaned baby hippo named Owen and the 130-year-old giant turtle, Mzee, Craig Hatkoff explores the language of love, friendship, and nurturance that these two incredible creatures share with one another. This book traces their first year together, including their adorable playful ways and the unique “language” that they have developed.

Cassie, who flew above New York in Tar Beach, soars into the sky once more. This time, she and her brother Be Be meet a train full of people, and Be Be joins them. But the train departs before Cassie can climb aboard. With Harriet Tubman as her guide, Cassie retraces the steps escaping slaves took on the real Underground Railroad and is finally reunited with her brother at the story’s end.

A Picture Book of Harriet Tubman

By: David A. Adler (NONFICTION)

From her rebellious childhood to her daring escape from slavery, Harriet Tubman was a confident, fearless woman. After heading North in search of freedom, she risked her life, again and again, to lead others out of slavery, devoting herself to guiding almost three hundred individuals along the network of safe havens known as the Underground Railroad.

What are your favorite fiction and nonfiction book pairings for older students?