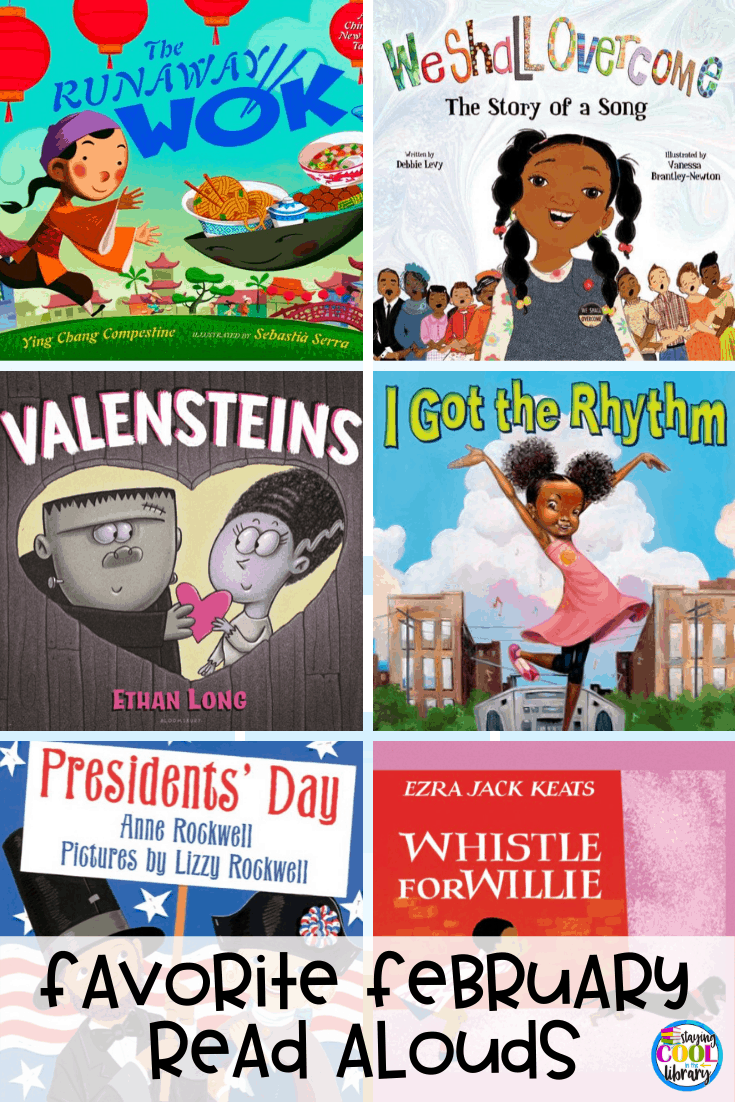 Besides reading Valentine’s Day books, February is one of the best months to read biographies and narrative nonfiction. Most of the books on this list focus on black history month and President’s Day. I also included a book that I just discovered called A Poem for Peter. It is about Ezra Jack Keats and how he was inspired to write the book The Snowy Day. I love this book so much, I just had to give it a special mention.

An illustrated biography of Abraham Lincoln, the sixteenth president of the United States and the man responsible for seeing the country through the Civil War.

Although a classmate says that she cannot play Peter Pan in the school play because she is African-American, Grace discovers that she can do anything she sets her mind to do.

Book From the back of the bus, an African-American child watches the arrest of Rosa Parks.

Before She was Harriet by Lesa Cline-Ransome

Moses, General Tubman, Minty, Araminta, the woman we know today as Harriet Tubman went by many names. Each represented one of her many roles as a spy, as a liberator, as a suffragist, and more.

Bringing in the New Year by Grace Lin

A Chinese American family prepares for and celebrates the Lunar New Year. Includes endnotes that discuss the customs and traditions of Chinese New Year.

A Crankenstein Valentine by Samantha Berger

A boy who looks ordinary transforms into grumbling Crankenstein on the most “lovey-dovey, yuckiest day of the year.”

Crown : an Ode to the Fresh Cut by Derrick Barnes

Celebrates the magnificent feeling that comes from walking out of a barber shop with newly-cut hair.

Duke Ellington : the Piano Prince and his Orchestra by Andrea Davis Pinkney

Looks at the life of jazz musician Duke Ellington, discussing his accomplishments and lasting popularity over the course of his fifty-year career.

Illustrations and rhyming text portrays George Washington’s lifelong struggle with bad teeth and his attempts to have dentists of the day fashion a set of false teeth that would bring him comfort.

Tricia Ann experiences the humiliation of segregation as she ventures out into Nashville by herself in the 1950s, but bolstered by the love, respect, and pride of her grandmother and other elders, she continues on to reach “Someplace Special”

After finding out there has never been a female U.S. president, Grace decides to run in her school’s mock election, where she learns about the American electoral system and sets out to be the best person for the job even though her opponent, Thomas, seems to be winning all the boys’ votes.

When Groundhog realizes he needs helpers all over the country to accurately forecast the weather, he establishes a school to teach young groundhogs how to properly determine when spring will arrive.

A fictionalized account of how in 1849 a Virginia slave, Henry “Box” Brown, escapes to freedom by shipping himself in a wooden crate from Richmond to Philadelphia.

The Honest-to-Goodness Truth by Pat McKissack

After her mother catches her in an untruth, Libby Sullivan promises never to lie again, but soon she must learn that it is not always kind to blurt out the whole truth either.

I am Jackie Robinson by Brad Meltzer

An illustrated look at the life and career of Jackie Robinson.

I Got the Rhythm by Connie Schofield-Morrison

On a trip to the park with her mother, a young girl hears a rhythm coming from the world around her and begins to move to the beat, finally beginning an impromptu dance in which other children join her.

If You’ll be my Valentine by Cythnia Rylant

A little boy makes valentines for his loved ones, remembering all the things each recipient likes best.

Lola at the Library by Anna McQuinn

Every Tuesday Lola and her mother visit their local library to return and check out books, attend story readings, and share a special treat.

It’s Valentine’s Day and Splat has a special valentine for a certain someone in his class. Her name is Kitten, and Splat likes her even more than fish sticks and ice cream. But Kitten doesn’t seem to like him at all. And then there’s Splat’s rival, Spike, who also likes Kitten. Will Splat’s heartfelt valentine win Kitten’s paw in the end?

Mufaro’s two beautiful daughters, one bad-tempered, one kind and sweet, go before the king, who is choosing a wife.

The Paperboy by Dav Pilkey

In the still before dawn, while the rest of the world is sleeping, a boy and his dog leave the comfort of their warm bed to deliver newspapers. As the boy pedals his bike along a route he knows by heart, his dog runs by his side, both enjoying a world that, before sunrise, belongs only to them.

When Peter discovers his blue furniture is being painted pink for a new baby sister, he rescues the last unpainted item, a chair, and runs away.

A Poem for Peter : the Story of Ezra Jack Keats and the Creation of The snowy Day by Andrea Davis Pinkney

The story of The Snowy Day begins more than one hundred years ago, when Ezra Jack Keats was born in Brooklyn, N.Y. For more than two decades, Ezra had kept pinned to his wall a series of photographs of an adorable African American child. In Keats’s hands, the boy morphed into Peter, a boy in a red snowsuit, out enjoying the pristine snow; the book became The Snowy Day, winner of the Caldecott Medal, the first mainstream book to feature an African American child. It was also the first of many books featuring Peter and the children of his — and Keats’s — neighborhood.

President Taft is Stuck in the Bath by Mac Barnett

Relates the incident in which President Taft supposedly got himself stuck in a bathtub in the White House on the day of his inauguration.

Mrs. Madoff’s preschool class learns about President’s Day and puts on a play about the men who inspired the holiday, particularly those featured on Mount Rushmore

Rap a Tap Tap : Here’s Bojangles– Think of That! by Leo Dillon

Rhyming text and illustrations describe the dancing of Bill “Bojangles” Robinson, one of the most famous tap dancers of all time.

On Valentine’s Day, Gilbert brings a tin of homemade cookies and his original nice or nasty poems to school.

Ruby Valentine Saves the Day by Laurie B. Friedman

Ruby invites everyone to a grand Valentine’s Day party at her mountaintop home, but when a blizzard keeps her guests away, she decides to take the carefully planned party into town.

On Chinese New Year’s Eve, a poor man who works for the richest businessman in Beijing sends his son to market to trade their last few eggs for a bag of rice, but instead he brings home an empty–but magic–wok that changes their fortunes forever. Includes information about Chinese New Year and a recipe for fried rice.

Too sick to perform his once-a-year job, Groundhog interviews other animals to come out of his hole on Groundhog Day.

Teddy : the Remarkable Rale of a President, a Cartoonist, a Toymaker and a Bear by James Sage

The story goes that on a hunting trip in 1902, President Theodore ?Teddy? Roosevelt refused to shoot a bear. ?Me? Shoot that little fella?? he said. ?Why, if I so much as ruffled his fur, I’d never be able to look my children in the eyes again!? When a political cartoonist shared the story in the newspaper, New York shopkeepers Rosie and Morris Michtom were impressed by the president’s big, warm heart. So they decided to create a ?Teddy? bear in his honor to sell in their store. The bear was so popular, they made another one. And another. Before they knew it, they had to build a factory to accommodate the demand: it seemed every child wanted a teddy bear of their own!

This is the Rope : a Story From the Great Migration by Jacqueline Woodson

A rope passed down through the generations frames an African American family’s story as they journey north during the time of the Great Migration.

As soon as Thomas Jefferson learned to read, he found his passion: books, books, and more books! Before, during, and after the American Revolution, Jefferson collected thousands of books on hundreds of subjects. In fact, his massive collection eventually helped rebuild the Library of Congress–now the largest library in the world. Barb Rosenstock’s rhythmic words and John O’Brien’s whimsical illustrations capture Jefferson’s passion for the written word as well as little-known details about book collecting. Author and artist worked closely with experts to create the first picture book on Jefferson’s love of reading, writing, and books.

On a cold, dark night perfect for scaring, Fran is making a valentine, causing other members of Fright Club to howl and hiss over the idea of being in love.

We Shall Overcome : the Story of a Song by Debbie Levy

Traces the history of the inspiring anthem and explains how it has come to represents the right for equality and freedom around the world.

A young boy tries to learn how to whistle, so that he can call his dog like all the bigger boys do.

The yuckiest, stinkiest, best Valentine ever by Brenda Ferber 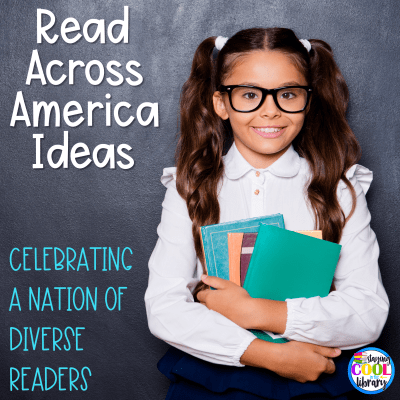 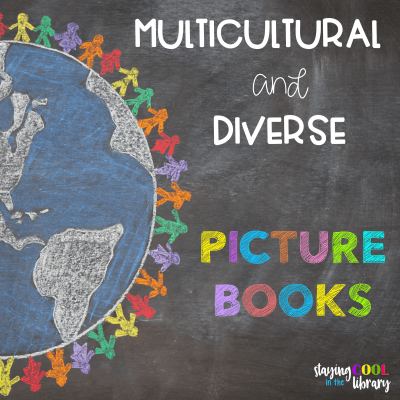 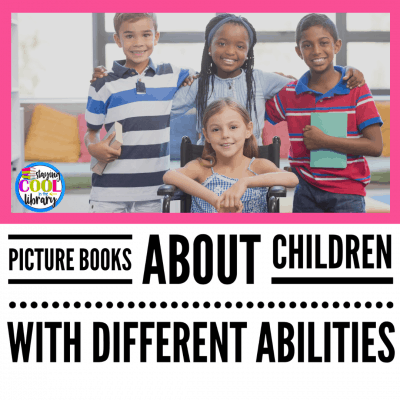 Don’t you just love this simple display that pac

read to your students check out this blog post. I

Shh! Maybe if we are really quite, Monday will go

These sweet synonym task cards will keep your stud

How do you stay organized during the school year?

"Libraries will get you through times of no money

Looking for some new ideas for Read Across America